No.1 for Boat Tours
& Water Sports in Samui

The Marine Dream. Your own speed boat for the day, with a bespoke service to exotic destinations. With three speed boats in operation we are able to offer a private charter option for guests that desire the ultimate in marine tour experiences – your own speedboat for the day.

With bespoke and imaginative itineraries to suit your specific needs and a wide variety of destinations on offer – it’s sure to be a highlight of your holiday.

Eco Friendly Scuba Diving and Snorkeling practices are something we take very seriously at 100 Degrees East; we are passionate about the environment that gives us our livelihoods and such pleasure, which is why the company became Koh Samui’s first PADI ‘Go-Eco Dive Center’ in 2006. Our previous projects have included beach clean ups and reef clean operations, as well as playing an integral role in the ‘BioRock’ project, which saw five artificial reef sites set up around the island in association with the Global Reef Alliance.

We are a patron of the Project Aware Foundation which was established in 1992 and is the dive industry's leading non-profit organization - "committed to conserving the underwater environment through education, advocacy and action".

100 Degrees East is a founding member of GIDOA (Green Island Diver Operators’ Association) – a group formed by like minded dive schools on Koh Samui to work together on environmental projects for the benefit of the island.

We are a member of Green Fins Project in Thailand which advocates environmentally safe diving practices and produces invaluable marketing material in both English and Thai to promote marine conservation and reef awareness.

To the uninitiated, coral is often mistaken for a rock or a plant, but is actually made up of tiny animals called coral polyps. There are hundreds of species of these soft bodied animals, which can be classified into 2 main groups of hard or soft corals. Hard corals such as brain and staghorn grow in colonies and are the architects of coral reefs; they excrete skeletons made out of calcium carbonate (limestone) and it is this skeleton which protects the soft coral polyps. These limestone skeletons are actually white and the coral polyps have clear bodies, but most corals contain symbiotic algae called zooxanthellae, which they need to survive and it is this algae which gives the coral its beautiful colour. Coral 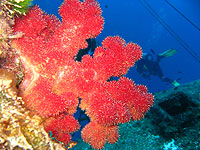 Soft corals such as sea fingers and sea whips are flexible and sway with the current - they do not have stony skeletons and are non reef building. Corals grow at different rates, depending on water temperature, salinity, turbulence and the availability of food. The largest coral are the slowest growing species adding only between 5 – 25mm per year. Branching and staghorn corals can grow much faster adding as much as 20cm to their branches in one year.

Coral reefs are the oldest and most complex ecosystems on earth and rightly deserve their mantle of rainforests of the sea. They have existed for over 200 million years and attained their current level of biodiversity around 50 million years ago. Although coral reefs occupy less than 1% of the earth’s aquatic environment, they are home to more than a quarter of all known fish species. They provide revenue to millions in the form of food, tourism, recreation and coastal protection and yet they are under serious threat.

The most severe threat to coral reefs is human induced changes to the environment. For coral to survive it needs sunlight, clear water, clean water, salt water and correct temperature. Every year over 20 billion tons of pollutants are dumped into the aquatic environment from land based sources. This combined with over fishing and destructive fishing methods, sediment and run off from inland erosion which chokes the reef with algae, irresponsible tourism and the warming of the world’s oceans have all contributed to coral reef degeneration. Some 58% of the world’s reefs are threatened by human activities.

What You Can do to Help 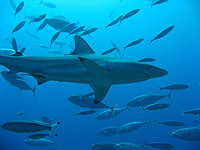 Typically Grey Reef, Juvenile Black tip and Bull Sharks have been the most frequently sighted sharks In the Gulf of Thailand. Sightings of these magnificent fish have been on the decline in recent years, as is the case in our oceans worldwide, a result of practices such as shark finning, over fishing and illegal fishing practices have all combined with a general lack of adequate and enforced protective legislation to drastically reduce their numbers and our opportunity to interact with these amazing creatures.

Sharks are cartilaginous fish and there are approximately 400 species of sharks known to inhabit the waters of the earth. Sharks have existed for some 400 million years and survived thanks to their extraordinary armoury of senses and have had to evolve very little overtime.

Sharks are the major predators of the oceans and seas, but thanks to the misconception that all sharks are dangerous man-eaters and negative publicity created by hugely inaccurate films such as Jaws, their demise now seems inevitable. Fishing, and in particular the barbaric practise of shark finning - whereby the shark’s fins are hacked off whilst still alive and the body thrown back to the sea for the shark to drown - have seriously and wastefully depleted the shark population. 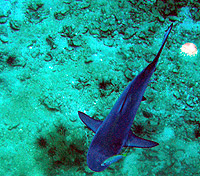 Every year humans slaughter more than 100 million sharks, each year taking younger and younger specimens to adorn the soup bowls of restaurants. The lifespan of sharks varies from species to species but they are relatively long lived fish, which mature slowly and produce few young. The combination of high tech fishing/overfishing and the ever growing demand for shark fin means that their future is endangered. Some species are already extinct and in many areas other species will disappear in our lifetime.

Ultimately life on earth depends on life in the oceans and for us to believe that we can remove the top predator from the oceans, that has ruled for more than 400 million years and not contribute to our own demise is extraordinary.

What You Can do to Help

To find out more please visit the websites below and find out how you can become actively involved.

The gentle giant of the oceans - the whale shark (Rhincodon typus) is the largest fish in the world. The largest whale shark found to date measured a massive 20 metres in length and weighed some 34 tonnes, although sightings more commonly involve specimens of around 6 metres in length. Despite its immense size, the whale shark is harmless to humans. It has few defences against predators, other than its size and tough skin on its dorsal surface. Primarily a suction filter feeder, the whale shark eats a wide variety of planktonic and nektonic prey such as small crustaceans and small schooling fish.

Whale Sharks in the Gulf 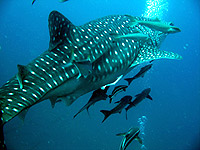 In the Gulf of Thailand, you can spot whale sharks around submerged pinnacles at sites that include Chumpon Pinnacles, Sail Rock, Southwest Pinnacles and Shark Island. Most sightings occur from March-April and August – September, although there are no guarantees. If you are privileged enough to have an encounter with a whale shark, please follow the Project Aware Whale Shark Code of Conduct:

If these simple ecological guidelines are followed, the shark’s behavioural patterns do not seem affected by human presence.

Although fisheries data for the whale shark is scarce, it points to declining numbers, with a significant drop in population in the space of only a few years. In Thailand the culling of whale sharks for meat and fins was banned in 2000, but generally whale sharks are extremely vulnerable to over-exploitation. For one thing, they have a very slow growth rate, reaching maturity at around 30 years old and living as long as 60 - 100 years. Their rate of reproduction is very slow with long intervals common between pregnancies. Damage caused to the marine environment by pollution, overfishing, the introduction of invasive species and global warming all present threats to their survival. Their meat and fins are considered gourmet fare in some Asian markets, where a single fin can fetch up to US $10,000.

What You Can Do to Help

Again - get involved. Always say no to sharks fin soup and boycott restaurants that sell it. A number of non-profit organizations have been campaigning tirelessly to protect the world’s largest animal for overexploitation and eventual extinction. These include WildAid, the UN Convention on International Trade in Endangered Species, ECOCEAN, Project Aware and The Shark Trust. Check out the links below to find out more.

Combining Snorkeling, Kayaking and Sightseeing
at Your Pace and in Peace

The environmentally protected reserve of the Angthong National Marine Park offers a variety of private charter options where we can combine scuba diving and snorkeling with a sightseeing tour of the National Park. The diving and snorkeling take place in the northern most islands of the Marine Park, whilst the central islands offer the chance to visit the stunning viewpoint at the Emerald Lake, take the opportunity to kayak along the fringing overhangs of the islands and also the chance to relax and swim off the many beaches.

Diving and Snorkeling Tailored to Meet Your Own Needs

The island of Koh Tao which lies 70km north of Koh Samui offers the best visibility for diving and snorkeling in the region. We have various private charter itineraries for Koh Tao which can combine groups of divers and non-divers and offer something for everyone for the day.

Beach Hopping at its Best

Lying directly to the north of Koh Samui is Koh Phangan, famous (if not infamous) for its Full Moon Parties which are held on Had Rin beach. However, for those of you wanting to absorb a more relaxing vista of the island and to discover and enjoy its true beauty, a private charter gives you the opportunity to take in the island’s stunning scenery from the comfort of your own speedboat.

Koh Phangan offers the potential to snorkel around the waters of the northern smaller island of Koh Ma, connected to the main island by a sand bar. You may also wish to stop and enjoy the vibes on the idyllic beaches and in the charming beach bars.

End Your Day in Style

A two hour cruise along the north coast of Samui between 16:00 - 18:00hrs. Take in the sights of the island’s north shore from a whole new perspective, with views out to our neighboring island of Koh Phangan and the spectacular Angthong archipelligo of 42 islands, which stretch out over the western horizon and into which the sun gently sinks. A perfect choice to end a special day or a great way to start a special evening.

Your own dive speedboat and personal dive guide for the day with a bespoke itinerary that steers you to the best dive sites in the region whilst staying clear of the crowds. Diving can be added to all charter destinations with a wide range of dive sites available, suitable for all diver experience levels.

For those of you who wish to be introduced to the underwater world our PADI Instructor can offer you the PADI Discover Scuba Diving program for you to start your diving adventure. Half day 2 tank dive trips and full day 3-4 tank dive options are all available upon your request.